USB-C is a mess of confusion that can leave even the savviest tech geek scratching their head. Even though it’s been around for a few years, there’s still a lot of confusion surrounding USB-C. It was supposed to be a universal connector, bridging together phones, computers, power supplies, and accessories. But there’s one big issue holding it back. The number of hardware manufacturer in a rush for competition just replaced the connector but left the backplane on older USB and even 2.0 The protocol, or specification, determines what the cable can transfer and how fast it can send it.

We at PIBOX India are often faced with questions related to compatibility and this article will attempt to comprehensively address the same.

USB C – Its just a connector. The actual speeds depends on the backplane your device supports and hence the funcionality.

There’s one big issue holding it back. The USB-C name refers to the physical shape of the connector, not the protocol. Even though two cables can have the same physical connector, what’s happening on the inside can be very different. The protocol, or specification, determines what the cable can transfer and how fast it can send it. Type C is just the shape of the connector, not the USB standards and protocols. This doesn’t be get into the face that Type-C can be USB 2.0, 3.0, 3.1Gen1, 3.1Gen2 or Thunderbolt 3. All with different data transfer rates and power capabilities.

Below is a easier method to find out if your Phone / Laptop has the required ability for supporting Video out, Power Delivery and newer features.

This document will help you understand if your device supports USB C features and if our PiBOX India connectors will be useful.

Jump to the respective device section to validate your capability.

Check below for a quick self assesment: Below steps will help you understand if your mobiles have the USB capability.

Lets address some common assumptions before we get started:

Your Mobile has a USB C port – Does it mean it supports USB C Features such as Video Out(USB-C to HDMI, Ethernet & Power Delivery?

NO. Only flagship models of Samsung Galaxy S8 or above (Non lite version), Samsung Note 8 or above, One plus 7  or higher models supports video out via usb c as they have USB C Back-plane.

phones models of: REDMI, xiaomi, POCO, REALME,, OPPO, VIVO,Lenovo, LG, Motorola, HTC, nokia (oTHER MANUFACURERS NOT IN THIS LIST- CHECK BELOW)  –NOT capable of Video out /USB C features.

Manufacturers do not disclose the information on the motherboard straight there are a lot of resources available where we can see the capabilities of the mobile if its capable of USB C(3.1 or higher) or if its older USB 2.0.

You can also see the full list of phones that supports video out via USB c from the wiki site that’s available.

As Android and the now-defunct Windows 10 Mobile are mobile operating systems, most manufacturers do not include support for wired video output. Even if support is present, it may not be prominently indicated on a device’s specification list.

Samsung’s DeX mode, Huawei’s Easy Projection, and Microsoft’s Continuum allow phones to offer a PC-like experience. In addition to regular screen mirroring, they allow apps to be used in multiple windows with a desktop-like interface when connected to an external display with keyboard and mouse.[24][25]

The gaming-oriented smartphones, ROG Phone and Razer Phone, support DisplayPort. The ROG Phone, when connected to the Mobile Desktop Dock, outputs 4K UHD video through HDMI and DisplayPort. Razer’s Project Linda, a work-in-progress concept, allows a docked phone to power a laptop and run apps on a larger screen, with the phone acting as a touchpad or second screen for custom interfaces.

The upcoming Android Q will introduce a native desktop mode.[26]

A bug introduced in Android Oreo has resulted in performance issues (unreliable video/audio). This bug affects phones running stock Android (Razer Phone and Essential Phone) that have been updated from Android Nougat to Oreo.[27]

On devices with no native DisplayPort support, the DisplayLink Presenter app, when used with adapters and docking stations with DisplayLink chipsets, can provide limited screen mirroring functionality.[28] However, as a third-party solution, playback of HDCP-encrypted video content might be disabled.[29]

(General – MAC books since 2017 support Thunderbolt, Laptops that has the icon matching above supports video out and newer features but check the below steps to validate your device capability also)

A number of laptop manufacturers are adding USB C port for better compatibility but they have not updated the back plane to higher speeds that support video out.

You should see a thunderbolt ⚡ or

“DP” icon on your laptop usb c port. Check the Logo next to your USB C port. If its just a USB icon or SS icon then it will not support usb c features. (More information below)

Below Chart explains the capability for your laptop: 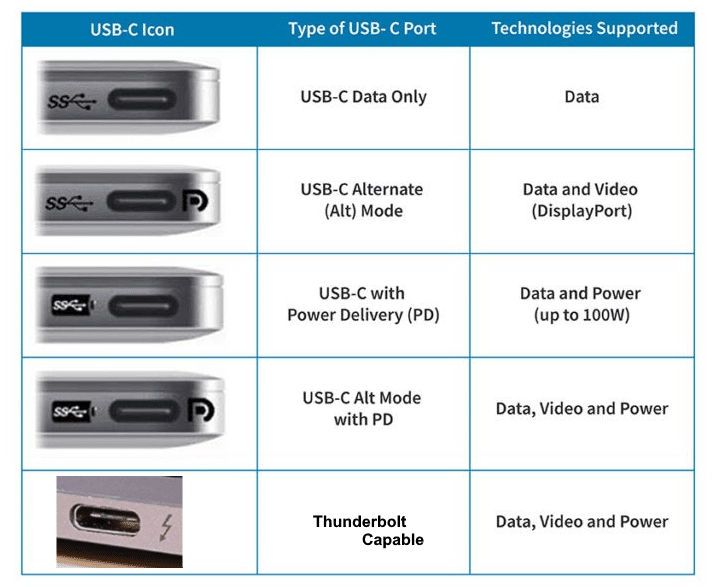 Manufacturers do not disclose the information on the motherboard straight there are a lot of resources available where we can see the capabilities of the mobile if its capable of USB C(3.1 or higher) or if its older USB 2.0.

Example Below for Dell G3 3590: The port below is USB 3.1 (Gen1) which means it will not support high end features as MST / Gigabit ethernet etc but it supports Video out as it supports Alt DP.

Example Below: for Apple MacBook Pro 15 (2019): The port below is Thunderbolt which means it will support high end features of USB C and Gigabit ethernet etc.

You can also see the full list of laptops that supports video out via USB c from the wiki site that’s available.

Below list is incomplete but will give you a guidance and use the DIY method above using LaptopArena and its more reliable.

We at PIBOX India believe that you must get what you paid for and we understand that you may not have had the time to do all the research before your purchase and we hope this article helped you with the understanding.  We truly hope that Mobiles and Laptops natively support USB C and we go to the good old days of USB – “If it fits, it works“.

Some useful Resources about USB C:

89 thoughts on “Devices that supports Video over USB C – Compatibility”